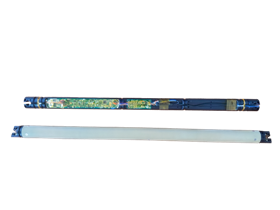 Enteq, the energy services technology and equipment supplier, has announced the launch of the XXT-Hop series, a real time communications solution for RSS and MWD operations

The system will allow drilling contractors to access real time data during live operations and offers a more efficient solution for operating equipment, which can significantly improve drilling performance, efficiency and return on investment.

The communications device can be used in conjunction with Enteq’s innovative rotary steerable system (RSS), The SABER Tool, or configured to work with existing RSS and measurement while drilling (MWD) systems. It utilises drop-in modules, consisting of a transmitter fitted above the RSS, which connects with a receiver in the MWD string to offer seamless integration and send real-time drilling data to the surface.

The XXT-Hop series removes the need for physical connectors, dedicated collar lengths and enables logging while drilling (LWD) to be run below MWD equipment rather than above, taking it much closer to the bit.

A version of the XXT-Hop series is currently in development with a range of 25 metres, which would allow MWD to run above the motor, leading to notable improvements in tool life.

While the primary function of the XXT-Hop series is to support operators and drilling contractors in the oil and gas industry, but it has also been designed for the wider energy transition sectors which Enteq supports, such as geothermal drilling and methane abatement.

Neil Bird, VP Advanced Drilling Systems at Enteq Technologies, said, “The XXT-Hop series uses existing concepts and trusted technology to provide operators assurances on the reliability of the equipment, the value of the data being received and peace of mind that they have the right tools in place. Its implementation also negates the need to delay decision-making following analysis of data or downhole testing and will lead to significant reductions in downtime caused by unnecessary wear to equipment.

“This system’s readiness to be used with other RSS and MWD systems on the market, and integrate with existing fleets seamlessly, offers enhanced performance without the need for significant turnover of equipment. The XXT-Hop series is also ready for renewable or environmental applications, such as geothermal drilling and methane abatement, adding to its flexibility and versatility - a key consideration for operators in a new market landscape.”

The XXT-Hop series has been developed to meet market demand with an initial range of 5m / 16ft for standard equipment set up, and Enteq is currently developing a future version that will be suitable for ranges up to 25m / 80ft.