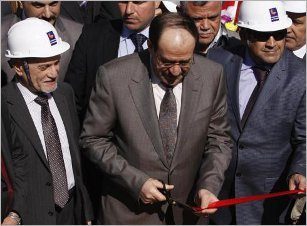 Iraq inaugurated a new offshore oil export terminal in the Gulf in a move to ease infrastructure constraints and to bring sorely needed cash for reconstruction after decades of war and international sanctions.

During a ceremony in the oil-rich province of Basra, Iraq's Prime Minister Nouri Al-Maliki opened the tap to start experimental pumping for the floating terminal located about 35 miles (60 kilometers) off Iraq's coast.

Iraq plans to start the actual loading of crude in a week to 10 days, initially boosting oil exports through the country's south — which currently stand at about 1.7mn barrels a day — by 200,000 to 300,000 barrels per day, said Dhia Jaafar, the director-general of the state-run South Oil Co. The terminal's full capacity will be 900,000 barrels a day.

The new Single Point Mooring (SPM) is the first of five export facilities that would eventually handle about five million barrels a day.The second floating terminal will be ready in the coming two to three months, Jaafar added.

First of many steps

The Director General of SOC, Mr Dheyaa Jaafar Hyjam said: "This forms the first of many steps that would see Iraq's export capacity rising to restore Iraq to its rightful place as a world-class oil producer." The project is part of a US$1.3 billion plan to expand export facilities in the south.

This achievement represents the start of the final commissioning activities leading to readiness of the facilities to load first oil cargo onto a tanker for export.

"With this project we will have no problems for the coming ten years regarding our oil export capacity," said Falah Al-Amiri, chief of Iraq's State Oil Marketing Organization.

95 per cent of revenue

Iraq currently produces 2.9mn barrels a day and its total daily oil exports averaged 2.145mn barrels in December. It plans to pump 3.4mn barrels this year and to increase exports to 2.6mn barrels a day. The government relies on oil exports for 95 per cent of its revenue.

Although Iraq sits atop the world's fourth largest proven reserves of conventional crude, about 143.1 billion barrels, decades of sanctions, war, sabotage and neglect have battered the sector.

Since 2008, Iraq has awarded 15 oil and gas deals to international energy companies, the first major investments in the country's energy industry in more than three decades.

Baghdad aims to raise daily output to 12mn barrels by 2017, a level that would put it nearly on par with Saudi Arabia's current production capacity. Many analysts say that target is unrealistic, because of the degraded state of the industry's infrastructure after wars and an international embargo that lasted more than a decade.