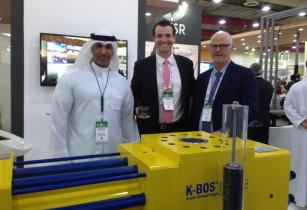 “This is a safety device that can shear anything in the well and seal instantly, regardless of the size or position of a given tubular in the well bore, or when the flow is established. “

Jones explained that it is a blowout ‘stopper’ rather than a blowout preventer.

“It can shear wireline and is particularly interesting in applications when you’re doing drilling completions, interventions or wireline operations on a high risk well. For example where there is a lot of H2S or pressure in the well there’s a lot of risk in the case of a blow out of more damage happening. You want to have assurance that you can shut in the well in the case of emergency. That’s where this is game changing.

“All the drillers are really interested in this device because it fundamentally changes the safety of their operations. Having this on your well you now that even if you have a problem, you’re going to be okayIt gives you a lot more time to react. Because it can shear on a flowing well on a full flowing blow out, you don’t have to actuate it before the blow out stops.Our device shears and seals in milliseconds, whatever the flow in the well and the pressure.”

At the NESR stand, a simulation is shown on video of the device in action. “In this simulation we establish a flow of a nominal 22,000 bpd and we flow that at 4,700 PSI, we activate the KBOS, we shear the tubular in the bore, establish a gas-tight seal rated at 15 KSI, and shut in the well on that pressure,” explained Reese.

The new technology, which is currently in the qualification process with NESR, has attracted a great deal of interest at the show, and has generated interest from operators in the market. A presentation is due to be given to KOC.