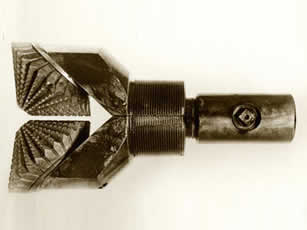 The landmark designation during a ceremony at the Baker Hughes drill bit technology facility in The Woodlands.  Texas, on August 10, 2009 – the 100th anniversary of the two-cone drill bit patent. An early production two-cone drill bit will be permanently displayed in the lobby at this facility. “The Hughes two-cone drill bit launched Hughes Tool Company. Perhaps more important, many experts view it as a key technology that ushered in a new era of abundant, inexpensive fuel and laid the foundation for Henry Ford’s successful Model-T and the automobile age,” said Scott Schmidt, president of Baker Hughes’ Hughes Christensen product line. “We are honored the ASME is recognizing this truly game-changing technology and we are proud to have provided our customers with the highest quality products and services to enhance their drilling programs for over 100 years.” Prior to 1909, the traditional fishtail bit scraped the rock and quickly dulled in service. The Hughes two-cone bit’s revolutionary rolling action crushed hardrock formations, allowing drillers to tap vast oil reservoirs deep below the surface. In 1933, Hughes Tool Company enhanced the two-cone bit concept with the Tricone™ three-cone drill bit.