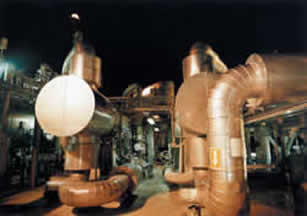 THERE ARE MANY players both domestic and international in the field, and they learned about Saudi Aramco’s strategies for feedstock increases and the plans for industrial parks near company facilities to boost private-sector activity and private-sector jobs.

“Direct investment in the chemical industry has grown from half a billion dollars in the early 1980s to about US$20 billion in the year 2000 and will be approximately US$70 billion by 2010,” said Sulaiman M. Ababtain, Saudi Aramco manager for Sales and Marketing.

“In Saudi Arabia, we have been actively pursuing the employment of heavier olefin feedstocks and, in the process, we are developing large olefin capacities with less ethane than in the past,” Ababtain said. A greater amount of heavier feedstock means larger quantities of petrochemical byproducts, which in turn creates greater opportunities to develop more diversified downstream uses.

“This allows the Saudi petrochemical industry to capture more opportunities in the global market,” he said. Saudi Aramco is also taking an active role in developing opportunities for local industries. “We are currently operating an industrial park in conjunction with our PetroRabigh project,” Ababtain said. “This park will host a variety of petrochemical and plastics conversion factories and provides land, utilities and other services at very competitive costs.

In fact, the first tenant has already established a factory.” PetroRabigh would look to sell increasing amounts of products to the factories in the park, thus promoting local industries. He also spoke of the Ras Tanura Integrated Project and detailed the company’s broad strategic focus, which extends to other projects, as well. Plans are in the works for a conversion park at Ras Tanura even larger and more diverse than that at PetroRabigh, which would benefit not only the petrochemical facilities but also the conversion park tenants. Envy Ababtain said the Kingdom’s march toward creating a new industry should be something in which we all take pride.

“Saudi Arabia’s petrochemical industry has blossomed over the years, growing from initial investments in the early 1980s to 24 mega-complexes, of which 14 are international joint ventures today. Currently, there are more than 90 basic chemical, intermediates and polyolefins plants in operation,” Ababtain said. “What we in the Gulf have achieved to date is the envy of the entire global industry, yet looking at the opportunities that exist — we still have a long way to go.”