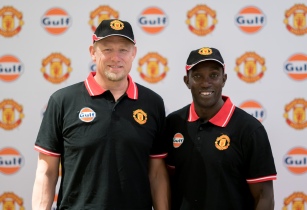 Gulf Formula ULE 5W-40 is an advanced performance, synthetic engine oil meeting mid/low SAPS (Sulphated Ash, Phosphorous & Sulphur) requirements. It has been exclusively developed to protect your engine from wear and sludge (that slows down the power) for longer durations thus keeping the car performance at peak power.

“We are honoured to have the legends Dwight Yorke and Peter Schmeichel with us to launch our new engine oil for SUVs. Our observation is that SUV’s are growing in this region and Gulf Formula ULE 5W-40 will help in keeping their performance at peak power even under extreme conditions thanks to its tailored molecules ‘Power Max’ that help cool faster, protect longer and reduce friction quickly,” said K.R. Venkataraman, CEO of Gulf Oil Middle East Ltd.

Gulf Formula ULE 5W-40 pack features Manchester United stars and the logo of the world’s leading football brand. It is currently available in the GCC and can be found at all leading retail outlets.