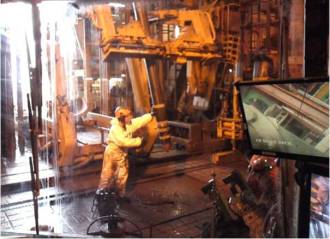 Two conventional attempts to run a 7" liner to total depth (TD) had been unsuccessful in the Statoil operated Gullfaks' satellite well, resulting in the liner hanging up hundreds of metres from TD.

The problem was caused by borehole instability and severe washout in the weak shales, coals and notorious paleosols of the area. The Gullfaks' team successfully drilled the sidetrack using Low Energy Drilling Operations (LEDO) principles and ran the liner, with Deep Casing Tools' Turbocaser Express as a contingency against well bore obstructions.

The operator considered two benefits. The Turbocaser Express would significantly increase the chance of getting the liner to TD, and if hole conditions proved too severe, the full-bore rapid drill through capability of the tool would still allow the remaining reservoir to be accessed.

The 7" liner was run and, as predicted, stood up with 10 tonnes at 4,117m, (1,260m from TD) where the liner could not be rotated or run deeper. Circulation was established and the Turbocaser Express was used to clear the obstruction.

The next obstruction was at 4,378m where the tool was again used to ream, and this was repeated most of the way to TD. Total reaming time with Turbocaser Express was 21 hours, at an average rate of 60m/hr.

Statoil's Senior Engineer, Drilling Operations, Michael Mountford, said: "The Turbocaser Express functioned well and we believe it was a contributing factor to getting the liner down successfully. We are likely to use it again in the future."

Deep Casing Tools CEO, Lance Davis, said: "It is a significant achievement to provide new technology to Statoil, a company well known for both innovation and high standards. Statoil chose the Turbocaser Express to land their liner, which also allowed them to drill ahead if needed. This is another major milestone in the continued success and growth of Deep Casing Tools."