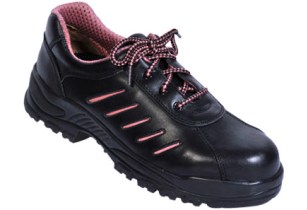 Saudi Leather Industries Company (SLIC) produces a variety of footwear, including safety, military and casual shoes, all of which have been awarded quality certification

New products from SLIC include a women’s safety shoe, which has a composite toecap and conforms to the EN 345 standard, and a security belt.

SLIC’s custom-made products include the six-inch foundry boot with metatarsal guard; the 12-inch boot for molten metal operations; the caster boot for casting operations; electrical footwear for 18 KV; and work shoes for airline crew, security guards and the hospitality industries.

The company became a member of the UK-based SATRA footwear testing centre in 2000, while its quality management system has been accredited to the ISO 9001 certificate since 1996. It is also affiliated with the FDDI (Footwear Design and Development Institute) in India for third party test certification of its products.

SLIC is currently a supplier to many companies as well as the defence sector in Saudi Arabia and a range of other Gulf States.