Quality at our feet 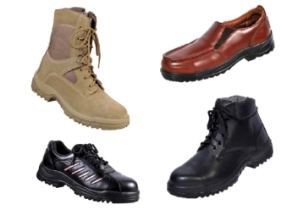 SLIC is considered to be a pioneer in the footwear industry. It produces a variety of shoes in its factory located in Dammam, the second largest industrial city in the region. The factory, sited in a total area of 15,000 square metres, is equipped with production lines consisting of new, high-tech machines, and a laboratory to ensure that the products exceed international standards for quality.

Due to the company’s ongoing concern for enhancing its products, SLIC became a member of the UK-based SATRA technology centre in 2000, knowing SATRA is a globally established authority for footwear testing. Our Quality Management System has been accredited to the ISO:9001 certificate since 1996.

The company is also affiliated with the FDDI (Footwear Design and Development Institute) in India for third-party test certification of its products.

Both SATRA and the FDDI conduct tests based on international standards, maintaining consistency in quality of all the products they test.

SLIC is a major supplier to many companies, as well as to the defence sector in Saudi Arabia and numerous other Gulf states.

Established in 1982, SLIC aimed to cover the needs for safety and military footwear in Saudi Arabia and to its neighbouring Gulf States, and has since become a pioneer in this field.

While initially focussing exclusively on safety and military footwear, in 1998 SLIC took a step forward in its development and added a new production line for the men’s ‘comfort shoe’, now a famous brand.

Today, SLIC products hold a major share in the Saudi market for its safety and military footwear – but it also holds a good share in GCC market. Recently, it has also successfully penetrated Arabian markets.

The company went through three stages of expansion. The most recent was in 2010, when it enhanced its production capacity to cover an increase in demand.

SLIC’s mission is to strive hard to attain customer satisfaction by producing quality products consistently, and by providing the highest levels of customer service by continuous improvement to its administrative, human and technical resources.

SLIC’s product range demonstrates this, by introducing a wide choice selection for customers, and offering numerous different styles and colours for safety and military footwear, which we believe underpins our high-quality service.

In addition, SLIC produces men’s dress shoes, again showing its willingness and ability to develop its products with the customer in mind, and desire to satisfy customer demands.

With safety in mind

Maximising safety combined with comfort is a key objective in SLIC’s safety footwear range.
SLIC has added a safety shoe for women plus a security belt to its product range, manufacturing safety shoes with composite toecaps, which conform the EN 345 standard.

This has been something of a coup for the company, since it has been recognised as the first manufacturer in the Gulf and Middle East to produce safety shoes for both men and women in which the composite toecap is intrinsic to the design.

SLIC manufactures custom made products such as the 6” Foundry Boot with Metatarsal Guard; the 12” boot for molten metal operations; the Caster Boot for casting operations; Electrical Footwear for 18KV; its work shoe for airline crew, security guards and for the hospitality industries.

It also produces safety footwear with a steel midsole conforming to the international standard EN 345 S3, for puncture resistant footwear which protects against sharp metallic objects.

SLIC product development department is a main arm of the company, and showcases the work of its talented staff, who are equipped with state of the art machines.

It’s here that SLIC strives to develop its products with technical superiority, as per the client’s needs, seeking to achieve customer satisfaction above all else.

The company's laboratory is equipped with latest instruments capable of testing all products to ensure quality and consistency around the clock. SLIC gives its highest priority to quality and pays close attention to achieving international standards, helping it produce an authentic and top-quality product.