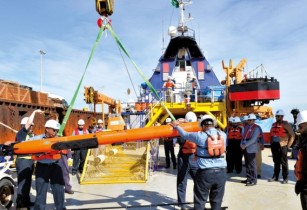 According to Aramco, the AUV aims to determine subsea asset integrity and locate possible leaks by conducting offshore pipeline inspections. This is also cost efficient.

“A job that could require a US$50mn large survey vessel can now be done with the US$2.5mn AUV,” said the company.

In addition to its cost avoidance benefits, the AUV’s technological innovation and modular design focus on allowing interchangeable modifications based on mission needs.

“The side scan sonar or bathymetric module for geophysical operations is a camera used for subsea inspection projects, and it is also the environmental module for oil leak detection surveys. An additional battery module can be added to the assembly, allowing the AUV to extend the duration of its mission,” Aramco added.

The AUV resembles a shrunken vessel but is safer, as the team operates it remotely onshore or from a boat controlling the vehicle through Wi-Fi when within reach of its connection limit. When at depth, the AUV works its mission’s route using its Inertial Navigation System.

Simon Squibb, the AUV field team leader in the Hydrographic Survey Unit of Saudi Aramco, highlighted the safety and reliability of the vehicle. “It hosts a selection of safety features that enable it to abort missions and avoid danger with its collision safety systems and eases the search and recovery with an embedded satellite phone and a pinger locator,” he said.