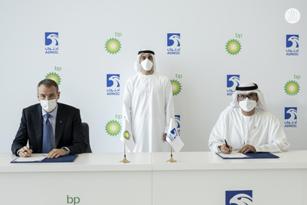 Abu Dhabi National Oil Company (ADNOC), bp and Masdar have strengthened their strategic partnership to progress the development of clean hydrogen and technology hubs, driving energy innovation for both the UAE and the UK

In the UK, ADNOC and bp advanced to the design phase (pre-FEED) of the H2Teesside low-carbon hydrogen project, in which ADNOC will take a 25% stake. H2Teeside is expected to kickstart the UK's hydrogen economy at scale with the development of two 500MW hydrogen production units by 2030. The project is targeting start of operations in 2027. H2Teesside will be co-developed within Teesside, a part of the East Coast Cluster on the Eastern coast of the UK, leveraging access to North Sea gas and bp’s existing CCUS capabilities.  End-users of clean hydrogen produced at the planned project are expected to include neighbouring large-scale industrial offtakers, such as chemical processors, fertiliser manufacturers and heat and power generators.

Masdar and bp signed a Memorandum of Understanding (MOU) to explore potential collaboration on the HyGreen Teesside green hydrogen project in the UK’s Teesside industrial cluster, which will be powered by offshore wind.

In the UAE, ADNOC and bp moved to conduct a joint feasibility study for a low-carbon hydrogen project in Abu Dhabi. ADNOC, bp and Masdar also agreed to explore production of Sustainable Aviation Fuels in the UAE using solar-to-green hydrogen and municipal waste gasification, leveraging the capabilities of the UAE’s Tadweer (Abu Dhabi Waste Management Centre) and Etihad Airways.

The companies’ successful progress in developing their new energy partnership builds upon the strategic framework agreements signed during the September 2021 visit to the UK by His Highness Sheikh Mohammed bin Zayed Al Nahyan, president of the United Arab Emirates (UAE).

Commenting on the agreements, H.E. Dr. Sultan Ahmed Al Jaber, UAE Minister of Industry and Advanced Technology, ADNOC managing director and Group CEO, and Masdar chairman, said: “ADNOC and Masdar’s deepened partnership with bp is a testament to the UAE and UK’s longstanding track record of bilateral partnership in sustainability as well as the UAE’s intent to play a leading role in the fast-growing clean hydrogen economy both domestically and internationally. To that end, we welcome the opportunity to collaborate with bp in both the UAE and UK, laying the groundwork for deeper commercial partnership in the area of new energies and clean technologies. In the UK, our role in Teesside will represent ADNOC’s first investment into the UK and help to accelerate innovation in decarbonisation of energy in industrial sectors. Similarly, the partners’ collaboration in Abu Dhabi is expected to further position the UAE as a leader in low-carbon energies and technology-driven industrial growth.”

Bernard Looney, bp’s chief executive officer, said, “ADNOC and Masdar’s involvement reinforce the world-leading role that Teesside and the UK more widely can play in leading the development of low carbon hydrogen for low carbon economies. From supply chains to skills, Teesside and bp are ready to deliver. Our partnership with ADNOC and Masdar stretches internationally and will be able to help decarbonize some of the most hard-to-abate sectors in the world – like industrial manufacturing, power and aviation – in a sustainable way. I want to thank H.E. Dr Sultan for his continued commitment to the UAE’s energy transition. Partnerships like this reach beyond borders to provide the new energy solutions the world needs.”

Masdar CEO, Mohamed Jameel Al Ramahi, said, “Today’s announcements will strengthen the strategic partnership between Masdar, ADNOC and bp and continue to drive clean energy innovation for both the UAE and the UK. Masdar has been a long-standing investor in the UK’s renewable energy sector, and we will leverage our expertise in offshore wind and sustainable aviation fuels to support both nations’ energy transition while solidifying the UAE’s leadership position in the emerging green hydrogen economy.”

The UAE and UK’s expanded new energy partnership closely aligns with the UK’s recently announced commitment to achieve 10GW of low-carbon hydrogen by 2030, and the UAE’s Nationally Determined Contribution of reducing greenhouse gas emissions by 23.5% compared to business as usual for the year 2030.