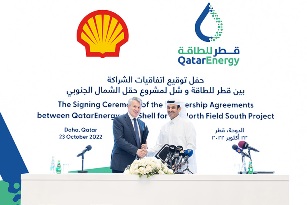 QatarEnergy has selected Shell as its second international partner in the North Field South (NFS) expansion project, which comprises two LNG mega trains that will have a combined capacity of 16 million tons per annum (MTPA) and which will raise Qatar’s total LNG production capacity to 126 MTPA

Pursuant to the agreement, Shell will have an effective net participating interest of 9.375% in the NFS project, out of a 25% interest available for international partners. QatarEnergy will hold the remaining 75% interest.

His Excellency Saad Sherida Al-Kaabi, the Minister of State for Energy Affairs, President and CEO of QatarEnergy said, “The new LNG volumes, which Qatar will bring to the market, come at a time when natural gas assumes greater importance in light of recent geopolitical turmoil, and amidst the dire need for cleaner energy to meet global environmental objectives. These volumes are a welcome addition given the increasing global concern not just over energy security, but also over a pragmatic energy transition as well as fair and equitable access to cleaner energy.”

"I would like to thank the Qatargas leadership and project teams for their efforts in implementing the North Field expansion projects on schedule, and with an outstanding safety record. Most importantly, we are forever grateful to His Highness the Amir Sheikh Tamim bin Hamad Al Thani for his wise leadership and unlimited support of Qatar’s energy sector,” the Minister concluded.

The North Field Expansion Project, comprising NFS and the North Field East (NFE) expansion projects, is the industry’s largest ever LNG project. It will start production in 2026 and will add more than 48 MTPA to the world’s LNG supplies by 2027.

The project is characterised by the highest health, safety, and environmental standards, including carbon capture and sequestration, to reduce the project’s overall carbon footprint to the lowest levels possible.

TotalEnergies was announced as the first international partner in the NFS project in September. A third partnership will be announced in due course.