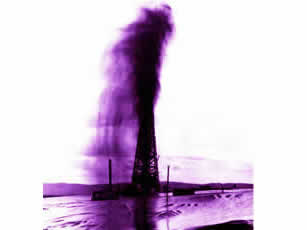 Further afield Egypt is being increasingly looked to as a one of MENA’s key producers as new processing facilities aimed at export markets are re-examined in the light of burgeoning domestic demand.

The first piped supplies were gratefully received by Syria last year as a welcome complement to declining oil output – and soaring power demand - there.

Reserves are conservatively estimated at 73 tcf – that’s more than the whole of China’s, and there could be half as much again – but new forex-earning projects have had to be put on hold as both domestic power and petrochemical demand are going through the roof.

A major drive is now on to attract more international participation in development through a more flexible domestic gas pricing structure; BP itself is playing a major part in this. Of course the really big one lies just across the Gulf in Iran. Whatever this huge country does to develop its nascent gas industry seems to be thwarted, whether it is withdrawal of FDI in petrochemicals or the slow progress of the proposed Pars LNG processing industry.

This has not been helped by the recent uncertainty about the future level of international gas pricing, as well as of course the ever-present political stalemate over nuclear energy development. The possibility of China stepping in where others so clearly fear to tread is always there, but China’s own uncertain demand for gas as other imports tumble renders this most unlikely within 2009. Then of course there’s Libya, home to gas reserves that are likely to be at least on a par with Kuwait’s – themselves now under active development – and Dar Alarab’s Oil & Gas 2009 exhibition from 16-19 February, which has been separately spun off for the first time from the wider Projex Libya infrastructure event.

The eastern half of this country remains largely unexplored and a profitable gasline already exists making landfall at the bottom end of Italy, one of the countries affected by the recent crisis over the deliberate cut-off in Russian supplies. Tripoli as an alternative source of supply must be being actively considered in several East European capitals right now, and if that doesn’t come to fruition then more supplies of Libyan LNG certainly will.

The rate of domestic demand growth in this country is low by MENA standards. Forecasts vary widely but a global shortage of gas is certainly on its way at some time. Most MENA governments are wisely fixing this problem while the global pressure is off.