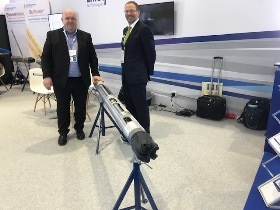 The SABER Tool, launched in February this year, is an evolution of the proof of concept, tested by Shell and licensed to Enteq, representing a step-change in directional drilling technology. The Enteq team, which has expanded rapidly in response to its product development and global growth ambitions, has re-engineered the concept with the application of proven technologies in novel ways, drawing on the centre of expertise for rotary steerables in the Cheltenham area of the UK. The result is a mechanically simple, plain collar and compact design that promises excellent control and new levels of reliability.

Speaking to Oil Review Middle East at ADIPEC, Neil Bird, vice-president Advanced Drilling Systems, Enteq Technologies, explained that while rotary steerable technology has been in existence for around 25 years, it has been dominated by the big service companies, and innovation is long overdue.

He highlighted the benefits of the SABER Tool afforded by the “elegant concept which leads to mechanical simplicity.”

“Whereas other tools have components that rotate with the collar, be that mechanical or electrical, the only thing rotating within the SABER Tool are the bearings – everything else is stationary. This principle of the tool means the downhole electronics are decoupled from damaging torsional vibration. In addition, we have increased the magnitude of braking force to ten times greater than the initial proof of concept. These results work to re-affirm our overall aim of creating a tool capable of working in the harshest conditions, while enabling us to create a commercially viable product.”

The SABER Tool has undergone downhole and system testing to verify its ability to hold its directional tool face stationary under varying, dynamic downhole conditions, with results demonstrating that its unique simplified control system works to successfully hold the geostationary platform.

“This is the first show at which we’ve exhibited the technology, and it has exceeded all expectations,” continued Bird. “The traffic has been excellent, with continual interest throughout the show, and visitors to the stand have been returning with other people to show them.”

Andrew Law, Enteq Technologies’ CEO added, “We see a good future in the Middle East, for both technical and commercial reasons. On the technical side, the principle of the tool means that it has relevant applications in the Middle East, while on the commercial side, our role is to support independent regional service companies, so we provide this technology to them as our route to market. They are always looking for something that is reliable, robust and efficient, and this tool has been designed and developed with that in mind. It’s very exciting, given that the Middle East is a key market for us.

“Service companies and operators have commented that this is the first truly new thing they’ve seen in a long time, and are genuinely excited,” he added.

Enteq expects the SABER Tool to be commercial by mid-2022.