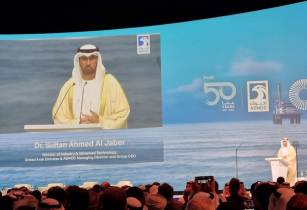 The most influential event in the global energy industry, Abu Dhabi International Petroleum Exhibition and Conference (ADIPEC) opened its 37th edition by pressing notes by ministers and dignitaries in the energy sector in the region on the challenges and opportunities in the sector

Following the COP26, ADIPEC 2021, held under the patronage of His Highness Sheikh Khalifa Bin Zayed Al Nahyan, President of the UAE, became the first global forum to discuss the key decisions and outcomes of the UN climate meeting.

Dr Al Jaber welcomed delegates and visitors back to the in-person conference, to once again discuss, and resolve the most pressing energy issues. “We meet at a historic moment. COP26 has just concluded which was a success, yet current energy dynamics have revealed a basic dilemma. While the world has agreed to accelerate the energy transitions, it is still heavily reliant on oil and gas.

“As economies bounce back from COVID-19 pandemic, at the fastest rate in 50 years, the demand has outpaced supply and after almost a decade of under investment in our industry, the world has sleep-walked into a supply crunch. It is starting to wake up.

“The oil and gas industry has to invest over US$600bn every year until 2030 just to keep up the expected demand. Although renewable energy is the fastest growing segment, ONG is still the biggest and will be, for decades to come.”

Dr Al Jaber added that technologies such as AI and big data are being applied into every segment of the business. As he stressed upon the importance for economies to act sooner, he informed the audience of projects that ADNOC is already engaged in to employ green practices. “From January 2022, 100% of our grid power will come from clean sources such as nuclear and solar. This will significantly reduce ADNOC’s operational emissions.” He noted that this would make a practical contribution to the UAE’s net-zero by 2050 strategic initiative ‘not in years from now, but in a matter of weeks.’

He welcomed partnerships with ADNOC from across the global energy ecosystem, and stressed that rewiring the energy system was a multi trillion dollar business opportunity that can work towards resolving the energy dilemma and is ‘good for the climate, humanity and economic growth’.

“As the UAE prepares to celebrate its Golden Jubilee, our leadership has issued a blueprint for sustainable growth called the ‘Principles of the 50’. This vision for our future economic development is based on the spirit of partnership. I see possibilities for partnerships at every turn, said Dr Al Jaber.

Recent achievements and collaborations of ADNOC were also highlighted, including the initial public offering (IPO) of Fertiglobe, and ADNOC Drilling – which was the largest IPO to-date in the Abu Dhabi stock exchange, oversubscribed by more than 30 times. Furthermore, he explained that the UAE is ‘well-positioned to become a major producer and exporter of blue hydrogen’, following four successful shipment ADNOC has already made this year to Japan and South Korea.

“What the world needs now is to hold back emissions, not progress. We have the skills, the resources, the partnerships to make the change. The future is now. Like my boss always says, let’s get to work and let’s make it happen!”

He also expressed the UAE’s excitement in hosting COP28 in 2023, where the nation hopes to use the forum as a ‘catalyst for practical, commercial and sustainable energy solutions.’