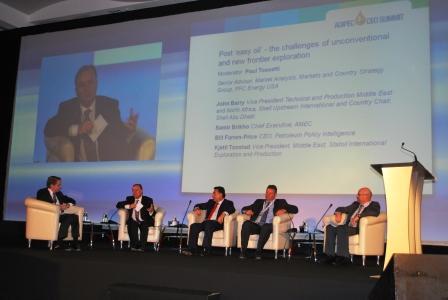 More than 250 top-name speakers and industry experts gathered at the first ADIPEC CEO Summit held on Sunday as a lead in to ADIPEC 2010.
Panelists took a hard and insightful look at the future of the energy industry.

The top of the summit’s agenda was the Abu Dhabi 2030 energy vision that is set to highlight the opportunities and challenges of the region.

The first session set the tone for the rest of the CEO summit with the panel agreeing that cost issues had forced a shift in thinking across the industry. It was agreed that the focus was now on how the industry can satisfy the world’s growing energy demands, which are expected to double by 2050.

A key insight that came out of the summit was that communication is not the industry’s biggest strength. There were calls for the industry to take a step back and look at the message it delivers.

Panelists discussed the need for the gas industry in particular to renew its image, show transparency and to win the trust of other parties.

In the second session it was agreed that the energy model has changed and is looking more at unconventional sources and new frontier exploration. A focal point of the discussion was the huge investment required for frontier exploration. Carbon capture and storage was also discussed with predictions that it would become increasingly financially viable.

There was also a lively debate about whether or not the era of easy oil had come to an end. Some panelists insisted there was a future in ‘easy oil’, pointing to the opening of Iraq’s upstream industry as well as Iran’s oil fields and advances in technology.

Some disagreed, saying that ‘tough oil’ was now the future of the industry and there were lots of risks to take into consideration. They pointed in particular to deepwater drilling, which they said despite the Gulf of Mexico disaster had a bright future.

Panelists also focused on the hurdles that the industry will have to overcome as it looks to the future, such as growing competition, geo-political risks and growing environmental concerns. They agreed that these risks would have to be addressed.

The summit finished with a look at future energy challenges and the growing role of clean technology. Particular focus was given to the UAE and its push to develop a clean energy strategy and boost employment.

Throughout the summit the entry of China into the market was ever present – particularly when it comes to clean technology. It was pointed out that in three years China has gone from having five per cent of the market in solar panels to 50 per cent.

There was also a focus on shale gas and its role in replacing polluting coal-fired power stations. It was noted that there is now enough shale gas in the United States to meet domestic needs for nearly 100 years.

Summit organizers wrapped up the event by hailing it as a huge success – and promising that the next summit in 2012 would be bigger and better.