Over the past six months, Probe Technologies Holdings, a supplier of cased-hole logging and advanced monitoring technology for the oil and gas and geothermal industries, has introduced new patented sensors and tools to improve data logging efficiency and accuracy 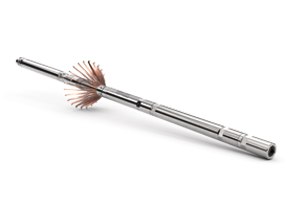 “One such improvement, for example, is that the tool’s sensors’ outstanding linearity and stability have allowed us to reduce calibration time to half a day. Consequently, our customers can increase asset utilisation by minimising downtime. It also means that electronics and sensors aren’t exposed to high temperatures more than necessary, reducing the risk of tool failure due to temperature fatigue,” he added.

In October, the MAC24, the first in the ProMAC series, was named the winner of the New Technology Showcase at LAGCOE 2019 in Louisiana. The new MAC24 incorporates innovations in metrology and manufacturing, greatly improving log data quality, accuracy and reliability when logging tubing and casing mineral deposition, corrosion, wear and mechanical deformation.

Based on the modular constant current sensor design developed specifically for the ProMAC Series, the tool delivers high stability and accuracy over its full operating temperature range of up to 175° C.

XY caliper for geothermal well operations: In September, Probe introduced the UHT Dimension XY Caliper, the first XY Caliper Tool designed to operate in ultra-high temperature settings. The tool, which builds on the Kuster Geothermal Logging Tool portfolio, performs in hostile environments up to 325° C (617° F) and provides two continuous independent perpendicular measurements (X and Y) of the internal diameter of the casing.

It generates a high-resolution temperature profile of the well via an external fast-response resistance temperature detector (RTD). It is the first caliper tool available to log in ultra-high temperature environments, such as those typically encountered in geothermal well operations.

In other development news, Probe is working on its Multi-String Isolation Logging (MSIL) tool, which offers a cost-effective solution for assessing the isolation behind casing without pulling production tubing from the well. The aim is to provide operators with a technology to evaluate and determine cement bond quality and isolation without pulling the completion, thus greatly increasing the efficiencies and lowering the cost of plug and abandonment operations.