Tala Al Ramahi, chief strategy officer for the Special Olympics World Games Abu Dhabi, said that while diversity remained a problem in oil and gas, ADNOC and other leading companies were actively seeking to change this 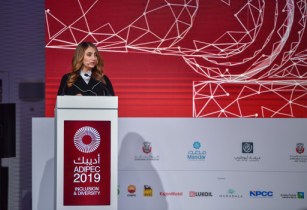 In delivering the keynote address for ADIPEC’s co-located Inclusion and Diversity in Energy Conference, she said, “Women make up only 15 per cent of the oil and gas industry, a number that drops further among the higher-paid technical roles.”

“The energy sector remains one of the least gender-diverse sectors in the economy, despite recent efforts to encourage and promote women’s participation.

“It is now time to understand why we fall short within various indicators of diversity and find remedies to correct them.”

Among the current positive developments, Al Ramahi noted that 22 major international and national oil companies had this year issued a call to action to close the gender gap in the industry. She highlighted ADNOC’s programmes to increase the diversity of its workforce, having been named the winner of the ‘Oil and Gas Inclusion and Diversity Company of the Year’ at this year’s ADIPEC Awards.

She also praised ADNOC for committing to recruit more people of determination into the organisation.

“Diversity matters and inclusion pays off when an organisation commits to being as diverse as they can be for everyone. Regardless of ability or disability, gender, or educational background, race or ethnicity, or cultural background. And again, this is not just about improving a company’s reputation. Study after study on this topic has repeated that this commitment to inclusion provides organisations with a serious competitive advantage,” she concluded.