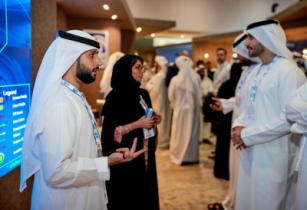 At the four-day event, which ended on 14 November, ADNOC made a series of strategic announcements to drive value as it doubles down on the mission of Oil and Gas 4.0 outlined by Dr Sultan bin Ahmad Sultan Al Jaber, Minister of State, ADNOC Group CEO, while delivering ADIPEC’s opening keynote address.

In the address, Dr Al Jaber announced ADNOC will join major international oil companies (IOCs) as founding partners of the ICE Futures Abu Dhabi (IFAD) – the new exchange that will be set up by Intercontinental Exchange (ICE) in Abu Dhabi to host the world’s first Murban crude oil futures contracts.

Dr Al Jaber said, “The new partnership and sales agreements we concluded have laid a solid foundation for the next phase of our growth and underscore our efforts to efficiently and responsibly tap the energy resources required to meet the world’s growing energy demand.”

The importance of In-Country Value (ICV) and ADNOC’s role in stimulating commercial opportunities for the private sector was highlighted at ADNOC’s 4th annual Business Partnership Forum, where the company announced more than US$7bn will flow back into the UAE’s economy in 2019 through its ICV Programme and thanked the private sector for embedding ICV into their procurement processes.

At ADIPEC, ADNOC took further strides to embed innovation and cutting-edge technology across its entire value chain, signing an agreement with Group 42 (G42) – an Abu Dhabi based artificial intelligence (AI), cloud and supercomputing company – to establish a joint venture to develop and commercialise market-leading AI products for the oil and gas industry.

ADNOC also announced its partnership with Total to deploy drones and unmanned vehicles to collect 3D seismic data as it expands its search for new oil and gas resources throughout the emirate of Abu Dhabi.

As ADNOC grows its upstream portfolio, the company is expanding its downstream business and seeking new markets for its growing portfolio of products. To support the downstream expansion, ADNOC signed a framework agreement with China’s Rongsheng Petrochemical Co. Ltd. (Rongsheng) to explore domestic and international downstream growth opportunities, including the supply of LNG to Rongsheng.

On the same day, ADNOC LNG, a subsidiary of ADNOC, concluded supply agreements with subsidiaries of BP and TOTAL, effectively booking out the majority of its LNG production through Q1 2022 as it continues to expand its footprint into new regions and markets.

Other headlines at ADIPEC included ADNOC’s long-term agreement with Emirates Global Aluminium (EGA) – the largest industrial company in the UAE outside the oil and gas sector – to supply EGA with the majority of the calcined petroleum coke produced by its new Carbon Black and Delayed Coker (CBDC) facility in Ruwais. Calcined petroleum coke is used by EGA in the aluminium smelting process.