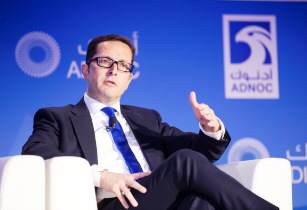 The SH-6 well was spudded five kilometres off the coast of Shuwaihat Island in the Gulf.

Speaking to reporters at the show, CEO Mario Mehren said, “I’m delighted that SH-6 was a success, both in terms of the safety and project management. We managed to complete our first offshore well in Abu Dhabi much faster than envisaged in our well-structured schedule, and with significantly lower costs. The Shuwaihat field is located in the western part of Abu Dhabi, about 25km west of the industrial city of Ruwais.”

Wintershall, Abu Dhabi National Oil Company (ADNOC) and Austria’s OMV signed an agreement in June 2012 to appraise the Shuwaihat sour gas and condensate field. As the operator, Wintershall is responsible for the technical appraisal of the field. Operations on the first onshore appraisal well, Shuwaihat-5, was successfully completed in time. The SH-6 well was drilled in the crest of the field to confirm the productivity of the reservoir.

Wintershall has been active in Abu Dhabi for several years and plans to expand its involvement in the region. To this end, in 2010 the company opened a regional representative office in Abu Dhabi, one of the major centres of oil and gas activity in the Gulf region. In June 2012, Wintershall signed an agreement with the Abu Dhabi National Oil Company (ADNOC) and the Austrian OMV company regarding the technical evaluation of the Shuwaihat sour gas and condensate field.

The Shuwaihat field places particularly high demands on the exploration and production. The sour gas within the reservoir contains 23 per cent hydrogen sulfide and seven per cent carbon dioxide.

For the well SH-6, Wintershall implemented an extensive detection and safety concept to handle the ultra sour gas condition. Fixed and portable gas detection and alarm systems were utilised to identify any release. State-of-the-art breathing air cascade systems on the rigs and the involved vessels ensured the health and safety of all personnel.