Hydrocarbons and energy ministers from the UAE, Oman, Egypt and Pakistan tackled the big issues of security and geopolitics in the first ministerial panel session at ADIPEC 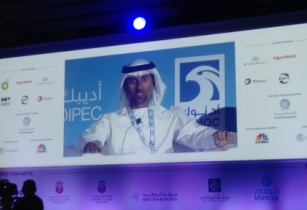 HE Suhail Mohammed Al Mazrouei, UAE energy minister, said that in regard to geopolitics and the next OPEC meeting, he praised the cooperation that has taken place between OPEC and non-OPEC producers and told the conference: "We hope to reach an agreement that will lead to more stabilisation in the market."

Oil price stability should be a particular priority for the global industry according to Minister Al Mazrouei.

"Prices of US$40 to US$60 within one year is too much fluctuation in one year,” he said.

But his take on the impact of geopolitics on OPEC proceedings was more philosophical: "Am I worried it will affect the next [OPEC] meeting? No. Am I worried about it in general? Yes.”

In regard to terrorist threats to oil and gas facilities as well as to countries in general, Minister Al Mazrouei had strong words.

“Some people are trying to play with the security of our countries and this will not succeed," he said. "Any organisation that is incentivising hatred and sectarianism or forming militias is considered an enemy of humanity and an enemy of the people. I don’t think they will succeed.”

According to Minister Al Mazrouei, the UAE is looking to be self-sufficient in gas and he urged GCC cooperation particularly with Oman and Saudi Arabia. He added that the region should aim for “power trading like in Europe - it has proven to be beneficial for all.”

HE Mohammed Hamad Al Rumhy, Oman oil and gas minister, focused on the importance of gas for energy security and urged players to "lean towards LNG".

Unlocking tight gas in Oman could prove to be a game-changer for the country but Minister Al Rumhy admitted there are challenges.

“Producing is an issue, cost is an issue,” he said. “In a hostile environment like Oman, everything is difficult to produce.”

In regard to current tensions within the GCC, Minister Al Rumhy said: “Misunderstandings between nations happen from time to time but the energy sector is neutral. We are talking with each other.”

HE Tarek El Molla, Egypt's petroleum and mineral resources minister, is optimistic that Egypt is emerging from political turmoil and will become increasingly attractive to investors.

“Since 2011, we have had two revolutions in 30 months - this affected negatively on investment - there was no stability [investors were] not very enthusiastic,” Minister El Molla told the conference, adding that oil and gas development needs to reflect the “new aspirations of the Egyptian people”.

“We are aiming high - we want a democratic, strong state.”

In regard to reducing subsidies, he said that in the last three years, Egypt has "committed to doing so and committed to keep doing so over the next two years, maximum three years.”

Minister El Molla cited investment by BP and Rosneft as examples of confidence in the Egyptian oil and gas industry.

“We took measures years ago to secure our oil and gas facilities," he said when referring to terrorist attacks which have occurred in Egypt. Now, he says, Egypt is looking ahead with "big exploration campaigns, big development projects."

The Honourable Jam Kamal Khan, Pakistan's minister of state for petroleum, was similarly upbeat about future oil and gas prospects. He said that Pakistan was looking for partnerships and that there are "opportunities in E&P, refining and LNG."

“In E&P, there is a lot of room for companies to come in and do work,” Minister Khan told delegates. "[And] we are looking to increase our capacity in refining."

"Companies are already there but we have more work," he said, using Pakistan's relationship with ADNEC and its "brothers in the UAE" as examples of existing strong partnerships. He also talked about the importance of working with Egypt and Oman, specifying the value of Pakistan's LNG partnership with Oman.