Ministers from six countries - UAE, Bahrain, UK, Lebanon, Canada and Sudan - all at different stages in their oil and gas journeys, took part in a panel discussion at ADIPEC highlighting the importance of cooperation between producers and consumers 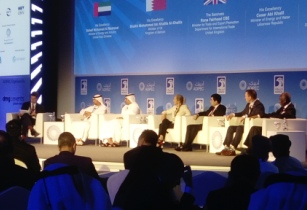 The ministerial panel for the second day of ADIPEC was largely optimistic about the future. (Image Source: Georgia Lewis)

With Sudan and Lebanon both seeking to develop their oil and gas industries and reduce their heavy reliance on imports, international cooperation is particularly important. Meanwhile, established producers, such as the UAE, Bahrain and Canada, are seeking to maximise opportunities along the entire value chain. For the UK, the experience developed over many years of operation in the North Sea could be critical to making trade deals after leaving the European Union.

Sudan minister for petroleum and gas, HE Dr Adel Rahman Osman Abdel Rahman, said that with the lifting of sanctions it is time for the country to “introduce itself back to the world petroleum industry”.

“The advent of petroleum was not a blessing in itself,” Dr Abdel Rahman told ADIPEC. Sudan lost vast swathes of its oil resources when the border was redrawn after the formation of South Sudan in 2011.

With a desire to move on from being a net importer of hydrocarbons, Dr Abdel Rahman said that Sudan is “very willing to cooperate” with other countries, particularly with energy security being a major priority. Less than 50 per cent of Sudanese people have reliable access to electricity and the energy mix includes gas oil, thermal and “a little bit of hydropower”.

“Renewables are hardly used,” Dr Abdel Rahman said, adding that hydrocarbon development will be a main driver for Sudan’s energy future. “It is incumbent on us to collaborate with the international community to develop many of the reserves that are available.”

As well as oil, Dr Abdel Rahman said that developing the Sudanese gas industry is part of the country’s “master plan” and that it will be “pursued vigorously with a schedule for implementation”. He emphasised the importance of using gas to help reduce emissions as it is the cleanest-burning fossil fuel.

“Gas will probably be the saviour of Sudan and possibly the human race,” he said.

Dr Abdel Rahman said that Sudan’s priority is to attract investment from exploration companies and draw in business from service companies while the country seeks to revive its upstream sector. He said this can be achieved via “liberal agreements and better fiscal terms”.

“We are a small country in resources and power,” Dr Abdel Rahman said. “We will need the energy to fuel the economy.”

Lebanon energy and water minister HE Cesar Abi Khalil told the conference that enabling exploration and developing the country’s nascent upstream sector was the main priority. Lebanon’s first licensing round has been completed and the technical offers of the successful companies are being considered.

“We are a new member of this club and we hope for the best collaboration,” Mr Khalil told the conference.

Like Sudan, Mr Khalil said that Lebanon is keen to use its hydrocarbons resources for supplying power because “our energy bill is the heaviest bill we pay”. It currently counts Algeria and Kuwait among its suppliers to power plants.

“We have good relations with our neighbours,” Mr Khalil said, adding that collaborating with its regional neighbours will help Lebanon become more competitive.

UAE energy minister, HE Suhail Mohammed Al Mazrouei cited Thailand as an example of international collaboration whereby consumers are helped to become producers and to benefit from development along the entire value chain. He said that the UAE has been exporting oil and gas to Thailand for along time and now it is investing in Thailand’s downstream industry, including refineries.

“Not all exporting countries have that capability - we started early,” said Mr Al Mazrouei. “An NOC that wants to send crude to a certain country can invest in its refineries and then this might give opportunities to explore a gasfield.”

In terms of investigating the possibility of unconventional exploration in the GCC, Mr Al Mazrouei said there is a “tremendous reserve of unconventionals in the region” but that such projects will require “a different timeframe”.

Mr Al Mazrouei said that OPEC has changed from a cartel to an organisation that is concerned with market stability. He said that it is “valuable [for member countries] to stay together and maybe expand”.

Bahrain oil minister, HE Sheikh Mohammed bin Khalifa Al Khalifa said the trend of inventory falling while the oil price had increased was “the right trend” for attracting investment. He warned the delegates of the possibility of a “supply crash” by 2021 and said that currently an underbalanced market could lead to an undersupply in the short term, which he described as “short-sighted”. However, in regard to the forthcoming OPEC meeting, he said he is “positive for an extension” of the production cuts. Mr Al Mazrouei echoed his sentiments and also said that there was a need for the extension.

Sheikh Khalifa talked about the importance of natural gas and LNG in particular to the future of the region. He called for more LNG terminals and said that an oversupply of gas in the next year is not necessarily a bad thing as it could make gas more affordable and increase demand. Bahrain is building an LNG terminal as part of the country’s drive to encourage more gas use in the region.

UK minister of state for international trade, Baroness Rona Fairhead said it is important to “expand trade as the UK leaves the European Union”.

Baroness Fairhead said that British companies have a long history of involvement in the UAE’s oil industry, including BP having a presence since the 1930s.

“We have a close relationship [with the GCC] and it will get closer - we are investing in the GCC,” she told the conference. “The UAE is our fourth largest export market outside Europe.”

Baroness Fairhead said that while North Sea reserves have been depleted, Britain has a reputation for being an “oil and gas authority” and has skills and technology that can be exported. She cited a British oil and gas technology centre as a “technology provider for the rest of the world”, as well as being able to share skills in decommissioning, nuclear power and renewables.

According to Baroness Fairhead, the UK has provided a £2bn line of credit to Saudi Aramco and invested £9bn for capacity-building in the UAE. She is confident that Saudi Aramco will be listed on the London Stock Exchange with conversations in this regard “ongoing”.

Economic development and trade minister for the Canadian province of Alberta, the honourable Deron Bilous said that Alberta has a “longstanding relationship” with GCC countries and there continues to be “interest in collaborating with our partners there”. Despite the downturn, Mr Bilous said that Alberta had seen an increase in production and it remained an attractive place for operators because it is a low-tax jurisdiction.