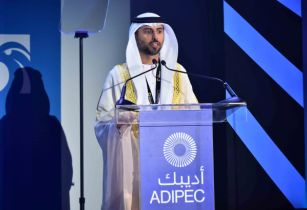 Held under the patronage of His Highness Sheikh Khalifa Bin Zayed Al Nahyan, President of the United Arab Emirates, ADIPEC 2016 is hosted by the Abu Dhabi National Oil Company (ADNOC), supported by the UAE Ministry of Energy, the Abu Dhabi Chamber, and the Abu Dhabi Tourism Authority (TCA Abu Dhabi), and organised by dmg events.

Speaking on stage, H.E. Suhail Mohammad Faraj Faris Al Mazrouei, UAE Minister of Energy, said: “Continuous industry developments, combined with a rapidly evolving global economy, are creating an increasingly competitive world energy market. This makes it essential that we leverage research, technology, and innovation to optimise both the exploration and production costs of every barrel that we produce.

“By doing so, our industry will thrive and remain competitive in this new energy world. I am confident that with our collaborative efforts, and by working both harder and smarter, we can help create a sustainable energy future for generations to come.”

The first day of ADIPEC 2016 concluded with the announcement of this year’s winners of the ADIPEC Awards during a Gala Dinner hosted by ADNOC at The Ritz-Carlton Abu Dhabi. The distinguished awards recognise individuals, companies, and projects that demonstrate excellence, best practice, and innovation in energy from around the globe.