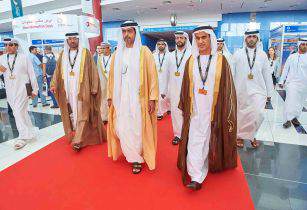 The 18th edition of the Abu Dhabi International Petroleum Conference is being hailed as the biggest ADIPEC to date, with more than 2,050 exhibiting companies and 85,000 attendees at the event, running between 9-12 November 2015

The four day oil and gas event, which is taking place at the Abu Dhabi National Exhibition Centre, will also bring together more than 600 speakers and 7,000 delegates from more than 120 countries.

With discussions focussing on how global energy firms are meeting the world’s energy demands, ADIPEC 2015 will involve a host of activities including workshops and panel sessions.

“The theme this year is innovation and sustainability in a new energy world – ADIPEC 2015 will capitalise on the success of last year,” said Sheikh Hamed Bin Zayed Al Nahyan at the ceremony.

One of the show highlights this year is the offshore marine and equipment zone. Companies such as Total, Occidental Qatar, Dolphin Energy and Tasneef will be able to showcase offshore products, services, and solutions. This will include subsea drilling equipment, and tools for reservoir production and mapping.

“One thing we are very excited about is offshore marine and equipment zone,” added the ADIPEC 2015 chairman. “There will be US$35bn investment in this area within the next five years, which will help meet market demands.”

Also commenting on this year’s show, Christopher Hudson, president, Global Energy dmg events stated, “Bringing together global, regional, and local industry leaders and decision makers to reflect on key industry topics, ADIPEC serves as a platform where innovation, best practice and latest developments are shared from all corners of the globe. ADIPEC has seen continuous growth over the years, in terms of both visitors, and global recognition, demonstrating the importance of the event in the energy industry.”

Winners of this this year’s ADIPEC Awards at the ceremonial Gala Dinner, which was hosted by ADNOC and held at the Emirates Palace Hotel were also mentioned at the ceremony. The ADIPEC 2015 Awards, which celebrates excellence in energy and recognises innovation in the Middle East, saw 501 submissions this year, from people involved in energy projects across the region.