Middle East is an optimistic region for us, says Ferguson executive 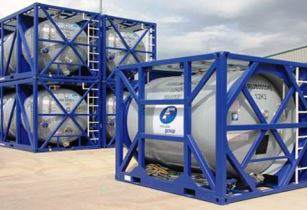 The company, which has offices in Abu Dhabi and Dubai, supplies tanks, baskets, waste skips and other offshore DNV 2.7-1 containers to the offshore energy industry.

At the biggest annual oil and gas show, Ferguson spoke about its operations in the Middle East region and why the Scottish company was still optimistic about the market in the days of depreciated oil prices.

Alistair Riddoch, sales and business development manager, Ferguson Middle East, said, “The decline is the oil prices, at the moment, is disappointing. But increased visitor attendance and exhibitor listing at ADIPEC has really given us hope that business is not that bad. I think the Middle East region is still doing quite well and this is encouraging.”

For the Middle East region, Ferguson is focusing on handling and storage of chemicals for offshore industry in DNV-certified units.

“Every time you lift intermediate bulk container (IBC), there is a chance of snapping. We are working on safe handling of chemical specialised tanks from 4,000 to upto 10,000 litres,” Riddoch added.

A wholly-owned subsidiary of ADNOC, ESNAAD, had invited Ferguson in October for presenting safe handling of tanks. “If you put 4,000 litres of chemicals into the tanks and then you try to lift it with a cling/crane, there is a risk. Therefore, you require tanks that correspond to DNV 2.7-1/EN12079 standards. The DNV-approved tanks are being used in the UK for a while now, but the Middle East region has not seen that many. We see ISO tanks here that are okay for storage but they cannot be lifted whereas DNV-approved tanks can be lifted and moved. Having said that, Ferguson is focusing now in that specific area.”

With Qatar, Saudi Arabia, the UAE, Egypt and Kuwait as main markets for the company in the Middle East, the company is also looking for more growth within other countries.

Another area of expertise that Riddoch points towards at Ferguson is manufacturing containers that transfer oil-based mud to land for disposal. Ferguson’s waste and cutting skips are effective in preventing spillages. Drilling fluids are a critical element in oil and gas operations, and disposal of these drilling fluids is a growing area of concern for companies.

According to Ferguson, an environmental impact study of the long-term effects of discharging cuttings that are coated with oil-based mud over the side, concluded that there is likely to be localised environmental damage to the seabed due to contamination from oil based mud ‘sticky’ cuttings.

“When you get to oil-based mud, the base oil is hazardous. Right now, we have 800 skips in the UAE and these cutting skips are 11 metric tonnes sealed units. We are providing this to ESNAAD for the operations. Soon by this year-end, the number may increase to 1,000 units. Cutting skips and chemical tanks is what is pushing the market in this region.”