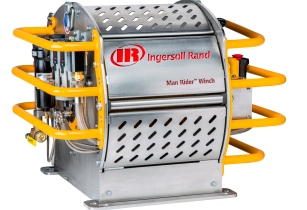 The new MR150 Man Rider winch includes the most built-in safety features of any of Ingersoll Rand’s dedicated Man Rider winches and features rugged construction and advanced engineering, according to the firm.

Ingersoll Rand will also showcase the latest high-torque tools from its QX series of cordless tools at the show, it revealed.

According to Ingersoll Rand, the QX Series is suited to industries that need high accuracy for fastening and connecting parts within the heavy equipment, light manufacturing, automotive or aerospace industries.

Ingersoll Rand specialists will be on hand to demonstrate the new equipment, while power tools and fluid management experts will be available to discuss the latest technologies in hoists, air-operated diaphragm pumps and pistons for oil and gas industries.

Famco is the distributor for Ingersoll Rand winches and hoists to the oil and gas industry across the UAE, Oman and Qatar oil and gas sectors and other industry sectors including, transportation, construction and manufacturing.