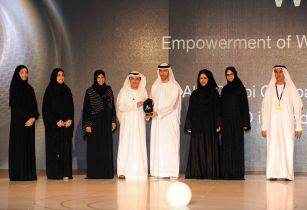 Celebrating innovation and commitment to excellence in the energy sector, the prestigious ADIPEC 2014 awards were presented to the seven category winners during the show’s Awards Gala Dinner at the Emirates Palace in Abu Dhabi

Hosted by the Abu Dhabi National Oil Company (ADNOC), the event concluded the opening day of ADIPEC 2014, one of the world’s largest oil and gas events.

Winning entries represented projects that demonstrated qualities of merit, including ethical oversight, sustainability and benefit to the community. Jean-Philippe Cossé, ADIPEC 2014 event director at dmg events, said, “The ADIPEC Awards play an influential role in shaping the future of the oil and gas industry, both regionally and internationally, by recognising best practice and providing a platform for achievers to share this valuable knowledge with the world.”

Chaired by Abdul Munim Saif Al Kindy, chief executive officer of the Abu Dhabi Company for Onshore Oil Operations (ADCO), the awards this year received a record number of entries, with 396 submissions from more than 100 organisations in 26 countries. Posting continuous growth since their launch in 2010, the awards had 104 more submissions than last year, representing five more countries, and with the participation of 21 more organisations compared to 2013.

The most popular category this year was Best Oil and Gas Innovation and Technology, demonstrating the critical role technology plays in the region’s energy sector and its development year on year.

Mohammed Shelaiweeh Al Qubaisi, director, human resources at ADNOC, said, “The demand for energy continues to grow, and it is our responsibility to work towards meeting this ever-growing demand through sustainability, technology, and, of course, by acknowledging talent. It is these achievements that will allow us to further develop as a knowledge-based economy.”

Ali Khalifa Al Shamsi, ADIPEC 2014 chairman, and strategy and coordination director at ADNOC, said, “The ADIPEC Awards offer an excellent representation of the ground-breaking work in the region. Winners of the awards have demonstrated innovation and excellence, and by recognising these achievements, we disseminate valuable information to all stakeholders in the energy sector.” “It is through such initiatives of knowledge transfer that best practice can be achieved in the global oil and gas industry.”

“We were very impressed with the entries in terms of both the quality and number of submissions, which continue to progress every year. What we definitely noticed is the sense of enthusiasm and the spirit of competition that prevailed among the entries,” said Tarek El Barkatawy, chairman and managing director at Tanmia Petroleum Company.

Peter Seitinger, general manager of the OMV Business Unit in Libya, said, “There were some brilliant ideas presented across all the submissions. Even those who did not make it to the finals merit recognition; it is essential that we compile an ideas bank that captures the exceptional work of all participants.”

New to the awards this year is the ‘Best Oilfield Services Company’ Award, which recognises exceptional service to the region’s oil and gas industry, based on ethical and sustainable practice, adherence to timelines, cost control and overall value. The winner was the National Drilling Company for its submission, ‘Committed to the Region’.

“GeoSphere is a tool used to optimise well landing in order to enhance hydrocarbon production. Oil has less places to hide with Geosphere. As nearly all of the ‘easy’ oil has been found, we now have to look for more challenging sources, and this technology allows us to drill in those locations,” said Tim Day, drilling petrotechnical engineering centre manager at Schlumberger.

“A well-established Health, Safety and Environment policy can essentially save lives, and we have worked hard on this initiative to ensure the safety of our employees. Every day, workers are exposed to a number of dangers in the oil and gas industry, however driving still has the highest associated risk. This is why we implemented a regional journey management centre in the Middle East to improve

drivers’ levels of commitment and reduce incidents associated with driving.”

Winner of the ‘Young ADIPEC’ Award, Mohammed Bader Abdullah from the Kuwait Oil Company was recognised for his submission ‘Living A Dream’.

“Future leaders are those who have the eagerness to learn more, the innovative skills to work more, and the curiosity to take risk,” said Bader, who was the first Kuwaiti to join the French Institute of Petroleum, and the first Kuwaiti engineer to work on the Enhanced Oil Recovery project with the Kuwait Oil Company in the country’s north oil fields.

ADCO was honoured with the ‘Empowerment of Women in the Oil and Gas Industry’ Award for its submission, ‘ADCO is Leading Women Empowerment’.

“Women have a critical role to play in the energy sector, bringing a host of professional skills to the field, and it is crucial that companies introduce inclusive policies,” said Ayesha Mohammed Al Hammadi, planning manager at ADCO.